Between the densely populated neighbourhood of Ponam and the busy tourist village of Anmok is a large area of farmland called Hapyeong Fields. A lot of the land is for growing rice, but some of the fields grow potatoes, chillies, radish, and cabbage. Most of the irrigation ditches are less than a metre wide and made of plain concrete, but the one pictured below is several metres wide and made out of stepped red brick. It was built several years ago and I wonder if it was built so nicely because it’s close to the road that tourists use. You can see tourist hotels in the far background of this photo. All the brick was overgrown this summer, but you can see the sloping sides. To make this photo, I stood in a pavilion overlooking the channel (seems too nice to be called ‘ditch’).
I set the camera picture contol to Vivid because of the wonderful greens. I usually use a more neutral setting but I wanted to show the vibrancy of this fertile spot. I don’t think the photo would work without the two rocks at the bottom of the frame. They keep the eye from falling out of the bottom of the photo and they provide a nice counterpoint to the tall pines near the top. 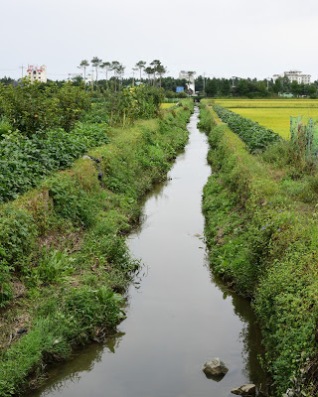 After Thought
This photo makes me feel calm now, but I was upset when I made it. I noticed this scene whilst cycling down a tractor road so I pulled over and parked my bicycle near the pavilion. Sitting on the edge of the pavilion were a father and son. The son was playing a phone game and the father was looking around. When he noticed me, the father stared a bit and then tapped his son on the leg. When the son looked up the father pointed at me and said, “Look, a foreigner.” I felt like something escaped from a circus. The son, to his credit, just ignored me and went back to his phone. The father continued to stare at me until I stared back at him and then he seemed to understand that staring is not too polite. The incident ruined my afternoon, but at least I didn’t let it ruin the chance to photograph this scene.