Here is my winter vacation project. Not just making photos with the F6 and Kodak’s new Ektachrome film, but learning how to expose slide film well. At the moment I find myself second-guessing the light meter all the time. “Will that white patch come out overexposed?” “Will his face look dark on the film?” “Should I use a spot meter here? +1? or +1.3 compensation?” I am going to keep careful records of every frame I make in the camera so I can study them alongside the developed film. No more haphazard photography. I’m going to master the medium of slide film. To this end, I’m going to use nothing but this camera and this film for at least the next two months. And it’s a good time to experiment with Ektachrome, because the lab I use in Seoul is offering half-price development and scanning for Ektachrome until April to celebrate the return of Kodak slide film. 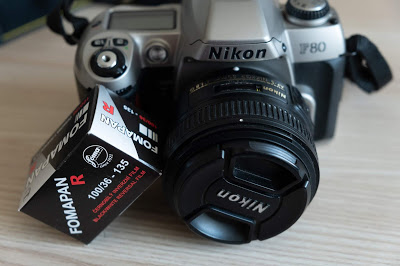 Not only do I want to practise getting perfect exposures, but I also want to practise slowing down. I don’t know why, but I have a tendency to rush. Especially when photographing in populated areas. Maybe I’m worried about having someone tell me off or call the police on me. Because I’m quickly pressing the shutter and scurrying off, I tend to waste a lot of film by not being careful about framing and exposure. Also, I always feel like I need to use up the 36 frames on a roll of film, like they’ll go bad if I don’t speed through them. I need to get out of that state of mind so I don’t waste even more film. It’s not cheap.

If I succeed in getting a better technique and not rushing film through the camera, I’ll have far fewer photos at the end of each month. But, I’ll have more keepers, and that’s a better outcome for my pocketbook and my art.

View all posts by marcusterrypeddle