Ojukheon is the historical residence of Yi I (pronounced E E), a Korean Confucian scholar and politician. The original buildings of the residence are now minuscule compared to the museum, gift shop, Confucian academy (where you can learn things like the tea ceremony), large square for performances, and other things that tourists come to see. If you go at the weekend, the parking lot of full of tour buses and the place is packed. Ojukheon is also famous because of Yi I’s mother, who was a painter and a poet. Mostly she’s revered because she was a good mother to an important person. Anyway, on to the photos. 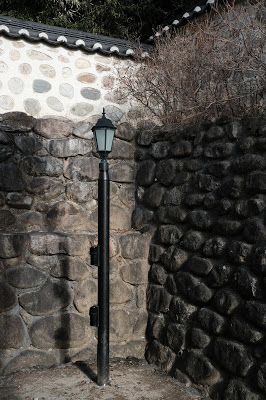 This wall doesn’t look like it’s been around for too long, but it’s rather attractive and done in the traditional style. The electric light is obviously a recent addition but doesn’t look too out of place. 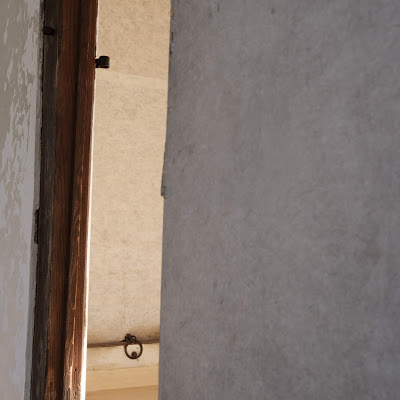 Here are a couple of ‘abstracts’ of paper doors and windows in one of the buildings. The paper on the left appears to be flaking off, possibly because tourists are putting their hands there when peering inside.

The inside of the building from another view. The little door on the bottom left leads to the next room. Korea people lived on the floors of their houses (some people still do, especially older ones) and so I imagine that’s why so many doors are small. Maybe this was just a door for the servants to use. The four panes on the upper part of the wall are not windows. They are doors for a kind of storage area.
Because all the walls are covered with white paper, the contrast between the interior of the house and the patch of sunlight didn’t overcome the digital sensor.

The same room from another angle. I don’t know who did this calligraphy, but I doubt it’s very old. The writing on the left is Classical Chinese, which was to Korea what Latin was to the West. The calligraphy on the right is hangeul, the Korean alphabet. Yi I very possibly didn’t write in the Korean alphabet (invented the century before) because it was considered vulgar by many scholars and politicians for a long time. King Sejong commissioned the alphabet so that everyone in Korea could read and write and the elite didn’t like this. The alphabet was even banned by one king because people started writing bad things about him. But I digress . . . . 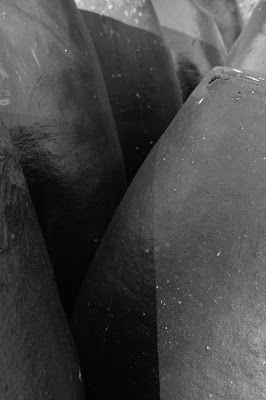 Next to the museum is a large number of clay pots. I’ve never seen them being used, so I think they might be part of the decorations. I liked the shadows on these pots and so made this photo. The pots are brown but didn’t really look very good in colour because of the strong sun. Black and white suits the scene much better.

The sun was very strong when I visited Ojukheon, so there are no wide views of the buildings, etc. Not that I go for that kind of photo anyway. I might go back when the weather is cloudy and there are fewer tourists. But I’m not sure the place is ever empty of tourists.

View all posts by marcusterrypeddle