A train track used to run through Gangneung, but it was removed when the new high speed train rail that takes a different route was put in. The city created a new market and a park in the downtown area where the rail line used to run. The rail bridge is now a pedestrian bridge to the other side of Namdae River. I went there earlier this month to make some photos, especially of the view from the bridge. 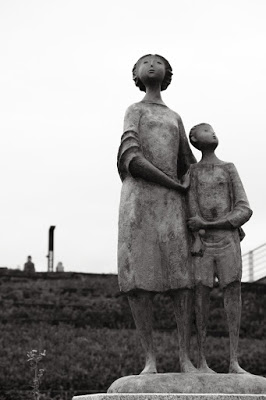 This statue is called “Sisters” and stands at the base of the stairs and ramp that goes up to the bridge. I always thought this was a statue of a mother and a boy, but I happened to read the plaque on the day I made this photo.

The view from the side of the bridge closest to downtown. An island of rocks in the river and an island of apartments among smaller buildings.

The same rocks from a spot a little further along the bridge.

The long view from the bridge. The closest bridge is also a pedestrian bridge called “underwater bridge” because in times of bad flooding it gets submerged.

“Sisters” is at the bottom of the stairs and this statue called “Free Time” is at the top. The woman is holding an empty coffee cup and in the background there are coffee shops. Gangneung tourism seems to revolve around beaches and coffee. Both things I don’t like very much. Nice statue, though. Lots of people come to take their photos with the statue.

And there you are. I want to visit this bridge and park a few more times to see if there are any other interesting views. The park is very crowded at weekends and during the vacation season, so I might give it a pass until the weather cools off and the tourists stop coming.

For those of you interested in such things, these photos were made with a Fujifilm X-T3 and the 18-55mm kit lens. They were made by the camera, but not Straight Out Of the Camera. The camera recorded raw files which I then transferred to my computer. Once I deleted the mistakes, et cetera, I connected the camera to the computer and opened Fujifilm X Raw Studio. That program uses the camera to process the raw files into jpg files. I used the Acros film simulation for the black and white photos with +1 warming. The colour photo comes from the classic chrome simulation. So, I chose my ‘film’ after I made the photos. Very convenient. I did a bit of burning in Lightroom on the distant bridge photo but the others are untouched.