Up until the present, I have been organising my photos in folders according to date. This is fine, but it is difficult to find photos according to subject unless I titled, captioned, and gave them keywords. Which has not always been the case. I would like to start putting together albums but photos of, for example, Anmok Beach, are so scattered throughout my film and digital libraries that it takes a very long time to find them. I can use the computer to search through folders, but, as I said, not all photos have captions or keywords. So I’ve decided that I might be better off organisng photographs in subject folders. Then I just have to click the ‘Gangneung Anmok’ folder to quickly see all my photos from that area. All my photos (except very old ones) have the date as part of the file name, so organising by date is simply a matter of simply clicking Sort by Filename in whatever program I’m using. There is actually not much need for keeping photos in folders organised by date.
Well, we’ll see how that goes. My other big project these days is scanning old film. Not all of it; just those pictures that are memorable or good. I’m also scanning old prints that don’t seem to have originals in film or digital form. I’m not photographing much lately because of the miserable summer weather, so I’ll share some of those older photos here. No works of art – just things that might be interesting to people who don’t live in Korea.

I don’t know when this photo was made, but it was probably the early 2000s. And probably with my first SLR, a Nikon F55 and the kit zoom that came with it. The film was probably something like Fujifilm C200 or whatever the local lab was selling. 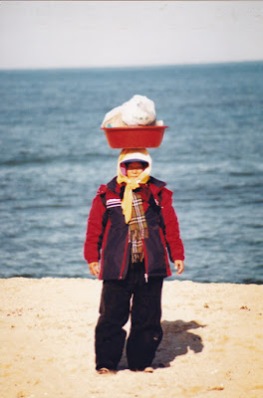 This woman was selling gimbap from a tub on top of her head. This was probably made on the same day as the horse picture above. My horizon levelling skills have not improved since the early 2000s. My photos are still often crooked.

I’ll upload photos that might be interesting as I rediscover them in my binders, albums, and hard drive folders. Maybe every day, if I’m diligent.

2 thoughts on “Scanning and Reorganising”