In my last post I wrote about the disappointment I felt with photos I remembered as excellent but, on seeing them again, turned out to be no longer impressive. Composition was the major flaw I noticed.
In the same year I visited the village of Wanggok up near the border. I was very proud of these photos and remembered them as some of the best work I had done. When I looked at the scans the other day I suddenly saw lots of problems. The compositions were generally good, but some were not perfectly in focus or the depth of field was too shallow. I probably used a warming filter because it was a heavily overcast day and I can’t seem to get the white balance correct in the scans. But this is probably just my lack of processing skill.
Anyway, here are some of the photos I made on that day. I liked the walls in the village and made quite a few photos of them.

I must have used my 140mm lens (Contax 645) for this photo because there is little depth of field. I used a tripod and I’m sure I used a narrow aperture, but only the plants are very sharp. The stone wall is slightly soft and the house wall is even softer. Well, it doesn’t look that bad if you don’t put your face too close.

This is the same wall, but photographed vertically and closer. Everything is sharp and I like the framing, but most of the plants are bunched up on the left, which annoys me a bit. 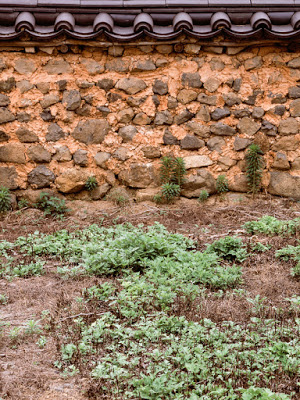 Another photo that suffers from a narrow depth of field. You’ll notice that this wall is topped with clay tiles rather than thatch. I guess someone had more money to spend on their home.

I like this photograph, but I think I focused on the flowers rather than the wall. The wall is acceptably(?) sharp, but what was I thinking? The Contax 645 is a wonderful camera but it was wasted in my hands.
In my next post I will share some photos of the houses in the village.